If You Use Reddit, Bernie Sanders Is Hoping You're a Fucking Idiot

On the front page, no less. It’s almost as if there’s a concerted effort to game the voting system and shove a candidate into a demographic hotspot.

Good for them, Reddit needs to learn its lesson. It probably won’t.

I expect the Bernie Sanders AMA to have a bajillion upvotes and staged questions.

Remember Obama’s AMA? Hailed as revolutionary, full of staffers lobbing him easy questions (HE ENGAGED WITH US GUYS! ON OUR SMALL LITTLE WEBSITE!!!). Getting excited about a candidate because he’s on Reddit is just about as retarded as getting excited because the candidate is on T.V.

Wait… I think that works.

Frankly, if I were a candidate attempting to get elected, and specifically targeting mid-20’s man-children, I would have a full-time team of Reddit manipulators.

They beat me to it. 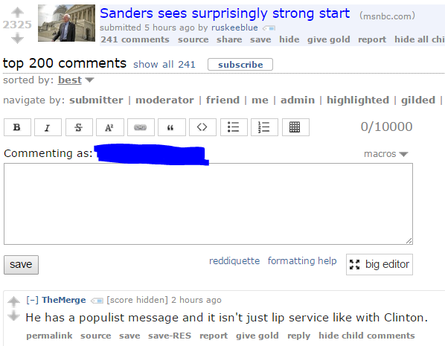 Currently #33 on /r/all - He hasn’t changed his message since 1981. This is our chance. Vote for Bernie Sanders! 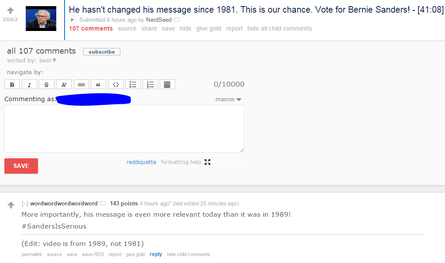 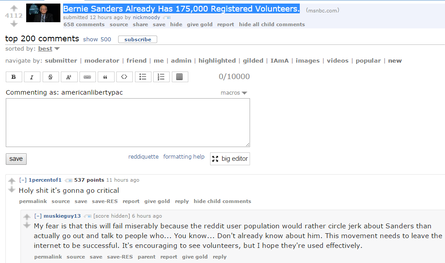 None of these posts or comments are cherrypicked. They are what happened to be on Reddit when I checked. Isn’t it weird how all of the top-rated comments are pro-Sanders, and Sanders seems to be everywhere? It’s almost as if it’s a manufactured campaign disguised as grassroots, which is exactly the gambit that retarded voters fall for. Hint: if you’re big enough that people are calling you grassroots, you generally aren’t. Groups don’t get big enough to wield national power and mindshare by being grassroots. It’s an empty term to make you feel as though you’re fighting for the underdog.

Let’s move into /r/politics, shall we? Again, this is totally random timing, but I’m confident I’ll prove my point. I haven’t even looked yet - let’s go.

#5 - Bernie Sanders’ Socialism Is as American as Apple Pie 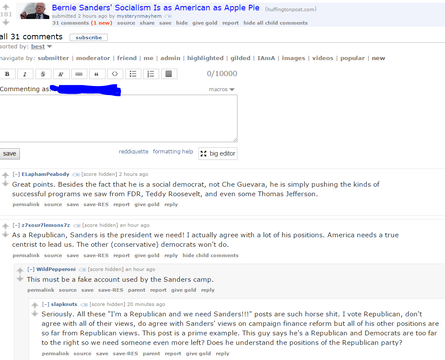 #11 - Bernie Sanders really matters: He doesn’t have to win to build a progressive movement

#31 - Third Party Politics with Bernie Sanders. His message has been the same since 1981

#36 - In a few days, Sanders campaign has raised over $2 million in small donations.

#86 - Where does Bernie Sanders stand? A look at key issues.

No other candidates even came close to the number of mentions. Hillary Clinton was probably second closest, and I only saw her name 2-3 times.

Make of all this what you will. I don’t care if you vote for him or not. But be prepared for more candidates to start blatantly rigging Reddit in their favor when they see how easy it is.

And remember that his campaign chose to manipulate this website in order to get him in front of your eyeballs. They think that you’ll be okay with blatant vote manipulation, fake accounts, and spam.

Because you probably are okay with it, and the rest of Reddit is too. Bernie Sanders thinks you’re a fucking moron. So does everyone else you vote for. At least he’s trying a fairly novel strategy.

“Hey, you know that free website where people upload content and it’s policed by members of the community? What if we destroyed that fragile trust by running a presidential campaign on that platform? That will show that we’re definitely good people who should be voted for.”

And fuck you if you call this “engaging with voters.” This is just manipulating a free, community-driven content platform. The only reason people think it’s okay is because politicians have thoroughly infiltrated every aspect of media they can, so why not one more?

They don’t respect you or the community they are invading. They just want your vote.

Update 9/27/2017 - In light of the Trump campaign’s masterful manipulation of Reddit during his presidential run, I thought it would be pertinent to read this article again.

I especially want to call attention to this quote:

“But be prepared for more candidates to start blatantly rigging Reddit in their favor when they see how easy it is.”

This was just a harbinger of things to come.

And it will only get worse.