The 2019 NOVA Open concluded yesterday - here are my thoughts about it.

I had an incredible time at the event. Being surrounded by thousands of people who felt the same way about playing and painting with expensive miniature toys was quite the treat. 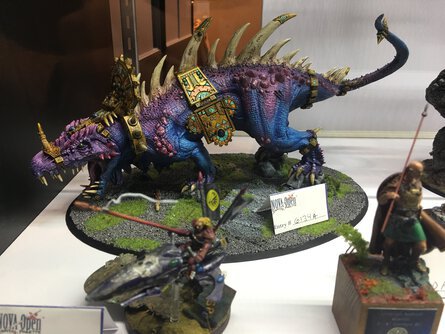 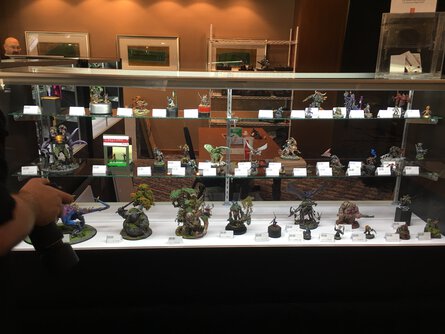 I was lucky enough to meet some awesome celebrities of the Warhammer community such as 2+ Tough, Bill Castello of Rolling Bad, and Jack of Re-Rolling Ones.

I was interviewed by Rolling Bad. Find my thoughts on the NOVA Open on Episode 73 (my segment starts at 1:17:30): http://rollingbad.libsyn.com/supernova 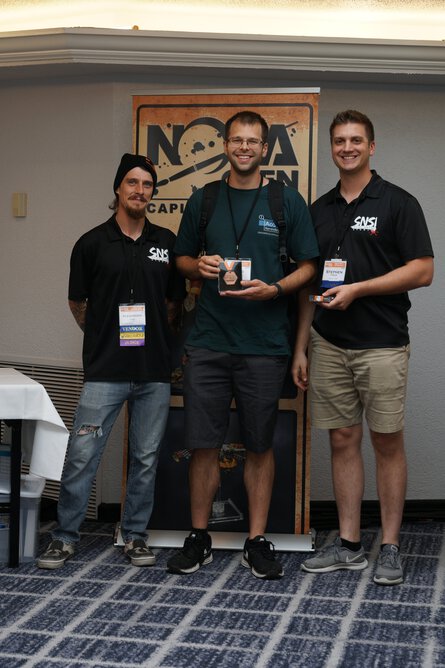 Next year, I will enter the GT and take more seminars. Everyone who was in the GT looked like they were having an absolute blast, and the seminars were apparently packed.

My take on the meta

The “Activation Wars” are a real thing, and it seems like all of the top-tier lists had some way of making units fight last, or having their units fight first. I walked past a lot of tables where people were groaning “Oh right, you get to go first for some reason.”

In my own Narrative games, I noticed that people really hated playing against Slaanesh. I was lucky enough to be on the same side of the table, so I didn’t have to deal with it, but I could see the frustration and helplessness that our opoonents felt. No matter how they approached a battle, they were essentially useless in combat until Slaanesh had done their thing.

I’m not a rules writer, so I won’t be proposing fixes for this. But I can definitely say that it sucks to play against armies that modify combat activation.

I saw like… one Seraphon army in the GT. I don’t think they are in the best place.

I saw a lot of Shootcast, a lot of Skaven, and of course, FEC, DoK, and Slaanesh. I saw some beautifully painted Kharadron Overlords, but I’m not sure how they fared in battle.

As far as my army list went, I went with a spell-heavy build centered around Kroak and the new Meteoric Convocation. It’s fun to drop global mortal wounds on the map :) Combined with a 6-model Ripperdactyl detachment with a Shadowstrike battalion, I was able to cripple my opponent early with a devastating alpha strike, and then follow it up by clustering around Kroak and sending Skinks to take objectives.

There were five or six floors absolutely packed with wargaming action. I walked around and just soaked up the ambient sportsmanship, good will, and good humor that permeated the air. There is something very special about being around people who have a strong passion - and this was a passionate group of people.

The orchestras playing pop music, the random “WAAAAAAGH”s coming from the vendor stalls, the food trucks, and the general feeling of closeness with other tabletop players - incredible. I think the Hyatt did a great job of hosting this event!

AoS Reminders - What a hit!

I walked around the tournament halls wearing my AoS Reminders shirt.

I was amazed at the response that the tool has generated. Every row of tables had at least a few people using the printout. When AoS players noticed my shirt, they would gush about how much it helps them, their significant other, their kids, or their local tournaments.

The competitive players talked a lot about using the tool to find hidden synergies in their lists - theorycrafting by adding/removing units and seeing where they could stack abilities in certain phases.

The casual players (like me!) were just happy that they weren’t forgetting their abilities anymore.

I asked just about everyone I talked to one question:

"What would you change about AoS Reminders?"

The responses I got were astounding. Some people had noticed typos. Others had various UI tweaks - great ideas that I’ll implement within the month.

I would estimate that 70% of the people I talked to mentioned one thing - they want to be able to save and load their army rosters. I’m happy to announce that… you’ll be able to learn more about that feature in about a week, when the next Rolling Bad podcast comes out. I did an interview talking about AoS Reminders and my future plans for the tool.

The past few weeks have been a whirlwind regarding AoS Reminders.

I made the decision to move the tool from this website (daviseford.com) to its new home - aosreminders.com. As much as I enjoyed getting ~40,000 visitors to my site in just a couple months, I realized that it’s better for the long-term success of the project to move it to an actual URL.

Our number of contributors grew even higher - 15 people have now contributed code to the tool!

There’s more to come, too. I’ve got some pretty big plans in the works!

Shoutout from Doom and Darkness, an amazing Australian Warhammer personality!
He talks about AoS Reminders starting around 4:10.