AoS Reminders v4.0.0 has just been released - and there’s a lot to talk about. 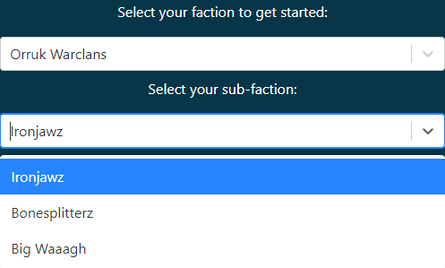 When I first began writing AoS Reminders last year, I took a few things for granted.

Mostly, I assumed that Games Workshop would continue to write books with the same general structure.

That assumption was accurate for about a year - and then it wasn’t. With the release of the new Seraphon book, and the added layers of complexity in list-building today, AoS Reminders was badly in need of an update.

The ironic part of this update is that, while the update itself is astonishingly huge (over 58,000 lines of code updated), end-users will probably notice only three things:

One of the more important design considerations for a project like AoS Reminders is the shape of the data. There are all sorts of arguments to be made for key-based vs index-based storage, which I won’t go into here.

Suffice it to say, when you are managing thousands and thousands of rules, it is important to arrive at a data structure that is A.) easy to update and B.) easy to process (computationally). It’s also important that our data structure matches the information being entered - and that’s where we begin this blog post.

To give you an example of how we used to describe a complex unit, I’ll show you our Morathi-Khaine entry:

This style of writing all of a character’s rules in one spot worked, but we had to write a lot of piecemeal code to properly handle it.

For example, if you selected Morathi-Khaine in the UI, we had to run through all of her rules, figure out which ones had special tags (like spell or command_ability), and then assign those tagged rules to the UI dropdowns so that a user knows they’ve been added.

We also have to make sure we remove the tagged rules when Morathi is unselected from the UI - that logic could be the topic of its own blog post, so I won’t go into it here - but I’m sure you can imagine the spaghetti code that resulted from all of these needs.

Now, I want to be clear - this pattern works. It served AoS Reminders very well for nearly two years.

And if Age of Sigmar battletomes hadn’t evolved, we could have stayed with this forever.

The Downfall of the Old Data Structure

We had to track the following pieces of data:

Units had all of the rules on their warscroll, plus whatever allegiance traits were granted to an army.

When a user selected an army, we just brought up their allegiance abilities and merged those rules with whatever else the user selected.

Keeping track of these rules was pretty trivial, to be honest. This pattern worked really well for a long time.

Kharadron Overlords is a great example of the newer style of allegiance abilities (all of the various Barak-* stuff). Ogor Mawtribes brought us even more ways to compose armies. More and more army lists began to be based around these complex allegiance behaviors.

At this point, battletomes had expanded in scope and ambition significantly, and we now had to track:

We could still manage this - but it was getting difficult. We were doing all sorts of things to allow units to share artifacts and command traits. We were making best-effort attempts at detecting which Specific Allegiance you belonged to, but it really was getting difficult to handle all of this data.

Here’s an example of a old “Specific Allegiance” entry - the Gristlegore Grand Court.

By the way, you’ve probably noticed that our terminology is getting pretty tough to handle.

What the heck is a “General Allegiance” vs a “Specific Allegiance”? What happens when they override each other?

Flavors (coined by @exonian) is the term that we now use at AoS Reminders to describe these “Specific Allegiances”.

These Flavors generally apply their own artifact, command trait, and command abilities, as well as a simple rule or two.

It’s a good thing we have a term to describe these types of rule-sets, because Games Workshop decided to expand their rules even more with the addition of what we call SubFactions.

When Games Workshop released the new Seraphon battletome, I knew that we were in trouble.

We were already struggling to properly represent armies on the UI.

And the new Seraphon book was about to push the code to a breaking point.

See, a Seraphon player could now select a Way of the Seraphon (either Coalesced or Starborne).

The player would then select their Constellation - but their choice of Constellation depended on their Way of the Seraphon selection.

To make matters even more confusing, there are battalions that also depend on the Way of the Seraphon selection.

This was pretty tough to represent in code, and in the UI. We basically just shoved the Way of the Seraphon and Constellation options into the same dropdown and figured that the end-user would be intelligent enough to select everything.

That… worked. Sort of. I gritted my teeth, wrote some really ugly code, and secretly prayed that the Seraphon book was a one-off.

A few battletome releases later, it became clear that this new style of rules was not an aberration.

What really pushed the codebase over the cliff was the release of the Stormcast Eternals Stormkeep.

The Stormkeep basically acted as an entirely different faction that shared many elements with the original Stormcast, but the amount of overlap was confusing and hard to represent faithfully.

In order to handle the Stormkeep properly within the application, we had to do something that I hated - we created a totally new faction in AoS Reminders - STORMCAST_ETERNALS_STORMKEEP.

That’s right - the Stormkeep represented such a departure from the rest of the Stormcast Eternals faction that we had to create an entirely new faction to represent them.

This was not good. I raised this concern with other AoS Reminders contributors over Discord and Github. We discussed current limitations of the system - we felt constrained and unable to easily represent relationships between items.

If you read the data structure issue, you’ll see us iterate through a few designs before arriving at the end result.

One thing that we had to do before proceeding - we needed to define what exactly we are talking about!

Factions, SubFactions, and Flavors - Oh My!

Let’s get analytical here. What exactly defines these terms?

Lastly in this high-level tier (but at the bottom), Flavors: 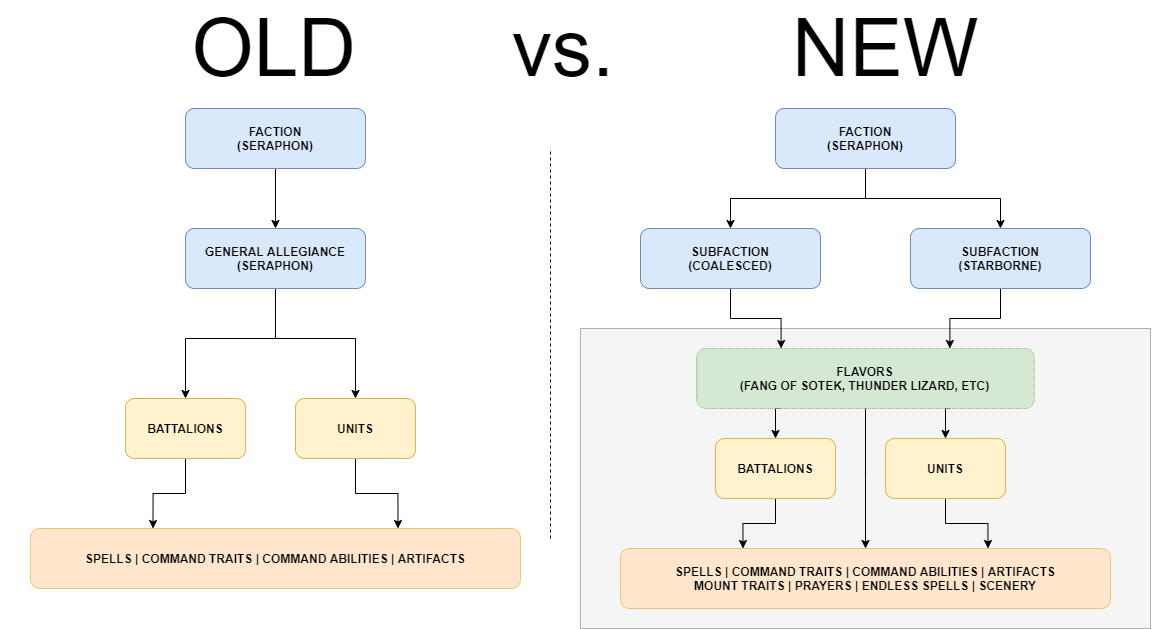 Bringing It All Together

Let’s use Slaves to Darkness as an example.

We’ll use the “Host of the Everchosen” SubFaction for this example.

Here’s how we describe a SubFaction in our new data structure:

You’ll see that we’re now composing the SubFaction by describing how it uses other, smaller components.

Our battalions, units, and flavors follow the same pattern:

As you can see, it’s a bit easier to reason about things when we’ve set it up this way.

The developer experience is phenomenal for this, by the way. Everything is auto-completed - setting up a complex unit feels like ordering food off of a menu.

If you’re not a developer, or your eyes start to glaze over, I recommend skipping this section.

I consolidated a lot of types within the codebase. I cut down on the number of ad-hoc types, and forced many files and components to respect a core set of types.

I used ts-prune and npx depcheck to cut down on unnecessary dependencies and exports.

One thing I’d like to address in a future patch - the size of our application’s payload.

We can run yarn analyze to see how our sourcemaps are distributed - the size of our rules catalog accounts for nearly 300kb (after gzip).

I think there are ways that I can defer loading in all of the armies in the main chunk - but last time I tried that, I was left with an asynchronous, laggy-feeling mess on the front-end (since lazy-loading rules always incurs a slight delay).

I will be working hard on cutting down our main chunk size, and exploring other ways to compress and store text more efficiently.

And the award for “Worst Function of the Year” goes to…

The competition for worst code was strong this year. I believe the nightmare above is the clear winner, mostly for the pure brain-fucking, but I’d also like to call attention to this masterpiece.

We have well over 500 tests governing how AoS Reminders works. Those all had to be updated and adjusted to reflect our new data structure.

We have a ton of features - saved armies, shared armies, importing from Azyr/Warscroll Builder/Battlescribe. All of these features had to be updated as well.

I wrote migrations for armies saved on the backend as well - tracking all of these changes was tough!

We also had to move Factions and SubFactions around - most notably, the various Orruk Warclans SubFactions (Bonesplitterz, Ironjawz, and Big Waaagh).

Worst of all, I finally conceded my years-long grudge. Look - I think Skaventide is a poor substitute for Skaven, and I will always say Skaven in conversation - but I have finally given in and changed the name in AoS Reminders.

It has taken over 24 days to arrive at the completion of this huge change.

It has been exhausting and rewarding!

Our work at AoS Reminders is never done. Beyond our continued commitment to always having up-to-date rules, we are also working hard to add useful features!

A small preview of what’s to come…

It’s not a secret that COVID killed Warhammer in 2020.

I’ve talked to so many friends who haven’t been able to find the will to paint anything.

TableTop Simulator is great - but it doesn’t scratch my itch. Age of Sigmar is a social, physical game. A virtual proxy simply doesn’t feel right.

I have marvelled at other content creators as they pushed through a terrible year.

I struggled to find motivation after March.

There was simply too much going on.

AoS Reminders was not spared from the broad economic effects of COVID, either. Luckily, I rely on subscriptions only to pay server bills, and not much else.

I gave away a lot of free subscriptions this year too - I got quite a few comments from people who liked the product but didn’t want to spend the money in such a tumultous time.

I am an awful businessman - I will always give my product away for free if I can.

I just want people to be happy.

I’m probably not the first person to mention that 2020 was a rough year, so I won’t dwell on it any longer.

I’d like to thank all of the contributors who have continued to build our codebase. AoS Reminders wouldn’t be the same without you!

I’d like to thank all of our subscribers - past, present, and future. While AoS Reminders will always be an open-source, totally free service, I have worked hard to add value to the application for our supporters.

I firmly believe that the amount of time that you’ll save by using our advanced features is worth a dollar.

I get amazing emails in my inbox from parents who are playing the game with their children, or their spouse.

I’m a big believer in using the Internet to spread good things - so this warms my heart.